I get it.  You're sick of Cthulhu.  Honestly, I am for the most part as well.

There are a lot of reasons to be burned-out with Cthulhu.  First, the source material is problematic.  And, I don't mean that in the edgy, "everything is problematic in 2019!" sense.  Lovecraft's work is actually problematic--he was deeply, virulently racist even by the standards of the 1920s, and many of his works reflect a deep xenophobia of the sort that bedevils our current era and its politics.  He's not exactly enlightened on women's issues as well.  Whatever you think of them, the Chapo Trap House games of Call of Cthulhu (examples of which can be found here, and here), while an intentional parody, are not that far off from the actual attitudes expressed in Lovecraft's works.

Second, I think over-exposure has dulled some of the edge of the Cthulhu Mythos.  I mean, I have a cute Cthulhu plushy sitting on the shelf of my bookcase at home that my brother got me for a birthday present a number of years ago.  It's hard to take Cthulhu seriously as an alien menace from beyond reality when he has been tasked with teaching little kids their letters.

Finally, there are structural problems with using the Cthulhu Mythos in tabletop roleplaying games.  In order to adequately represent many of these creatures in game terms, you have to make them insanely powerful.  But making them so powerful (especially in games that tend not to have quadratic power progression a la D&D) makes them difficult to actually use in the game.  Famously, in a combat with Cthulhu per the Call of Cthulhu rules, Cthulhu eats a random number of PCs every turn, and the PCs are unlikely to be able to do anything meaningful in response, as the PCs will be blasted with the enormous Sanity loss as a result of observing Cthulhu himself.  Actually encountering Cthulhu is a one round TPK, guaranteed.  And so, generally speaking, PCs don't actually encounter many of the more interesting elements of the Mythos.

As a result of this last element, tabletop RPGs that are "about" the Cthulhu Mythos are actually about something else (or some set of things), with the Mythos acting as a kind of background MacGuffin.  Those games as interesting as the thing they are really about is interesting.  And, at a certain point, following a trail of clues up to the point where you get blasted in the face by an overwhelming foe, which is a simplistic but not inaccurate description of what many Mythos-based RPG scenarios are about, gets a little boring.  It is a testament to the skill of the adventure writing in both the Call of Cthulhu line and other lines like Trail of Cthulhu that they can make this basic formula work and be interesting and fresh, because the underlying premise is not inherently that exciting. Nevertheless, even if you are officially on the "I'm done with Cthulhu" train, I would urge you to suspend that sentiment and give Ken Hite's The Fall of DELTA GREEN a chance.  Hite understands, or at least seems to understand, the idea that Cthulhu games have to have something in the foreground that is not Cthulhu in order to work.  So, while The Fall of DELTA GREEN on one level about fighting the infiltration of the Cthulhu Mythos into our world, it is really about the 1960s.  More specifically, it is about the 1960s in the United States, and how the 1960s eroded the essentially unbounded confidence that Americans had in their country that was inherited from World War II.

The key to The Fall of DELTA GREEN and why it works is that it uses the Cthulhu Mythos as a way to supplement and "turn up the temperature" on events and ideas that are already present in the 1960s.  Telling a story about Vietnam is in many ways already a horror story; adding the supernatural elements just highlights what is already there.  There are many very valid reasons to lose faith the U.S. government through the course of the 60s, so adding on top of all the other reasons the idea that there is a secret conspiratorial organization within the government that is researching alien technology and magic ("hypergeometry" in the language of the game) just puts a finer point on things.  There is a natural marriage between the sense of alienation that comes as a result of the actual historical events of the 1960s and the alienation embodied in the Mythos, and that marriage is why The Fall of DELTA GREEN is so compelling.

This dual sense of alienation is furthered by the fact that the PCs are agents of the U.S. government, members of unacknowledged agency DELTA GREEN dedicated to hunting down and destroying elements of the Mythos.  As such, PCs are placed in a front-row seat to watch things go down the toilet, both in the world generally and in terms of their own particular situation.  The default starting year is 1968, a year which in many ways represents the tipping-point beyond which no one could deny that the halycon days of the immediate post-War period were firmly in the rear-view mirror.  Even better, The Fall of DELTA GREEN fits within the broader DELTA GREEN universe, which states that the DELTA GREEN was shut down by the Pentagon in 1970.  In other words, the organization you are working for is literally at the end of its rope, but no one knows it at the time.  I'm not going to tell anyone how to run their games, but I would favor telling my players this fact ahead of time, as a way to emphasize the idea that this is the "fiddling while Rome burns" phase of things.

So, The Fall of DELTA GREEN is a dark game and setting.  But, unlike so many fictional settings that try to be dark, this game is very understated.  There are no cheap and contrived "edgy" set-pieces put in for shock value.  Instead, it lets the source material do the work.  The intro adventure that comes in the corebook is set in part in the tunnels used by the Vietcong, which is an inherently scary location even before you introduce elements of the Mythos.  War, racism, political violence, social unrest--all of these things are right there, in real life, waiting to be mined as the base for the supernatural to be layered on top.  The events of the late 1960s are so wild on their own that scenario design seems to me to consist of finding some crazy event that really occurred in history, brainstorming the most paranoid explanation for that event, and running with it.  Two hours after putting the book down for the first time, I had eight pages of notes on the how the Mythos ties into the Kennedy assassination, and had Oliver Stone's JFK queued up on Amazon Prime to mine for more material, all ready to be used in a campaign. Another dimension to The Fall of DELTA GREEN, and a reason I think the game resonated with me, is that the 1960s are the perfect distance away to tell stories that have resonances with the present.  I don't think many are going to find this controversial, but I feel like we are living in another period in which people are experiencing alienation as a result of being let down by institutions and governments.  But it is hard to write about, or even really engage with, events as they are unfolding, because you are too close to them and it is hard/impossible to see the full picture to construct narratives.  The 1960s, however, are firmly in the past, and so they can be seen as a whole, with a sense of remove.  At the same time, it is familiar enough and similar enough to the situate we have now that GMs and players can make easy comparisons with things happening right now.  I suspect that running a few games of The Fall of DELTA GREEN, while perhaps not always "fun" in a conventional sense, might be cathartic for many people in 2019.

Mechanically, The Fall of DELTA GREEN hews pretty close to the GUMSHOE baseline.  Players pick a background specialty that lines up with their prior military or other government service before they were recruited into DELTA GREEN, and this background gives them a spread of Investigative and General Abilities (a system used, in one form or another, in many GUMSHOE games, including Ashen Stars and Trail of Cthulhu).  These are then tweaked with a few more points to spend, and then the character is good to go.  In terms of new elements, The Fall of DELTA GREEN has more extensive combat rules than the baseline GUMSHOE, but unlike Hite's own Night's Black Agents and the forthcoming Swords of the Serpentine which push the action in a more cinematic direction, these combat elements mostly revolve around making combat more violent and deadly, adding critical hits and the "insta-death" Lethality rules.  All of which is well within the tone and feel that the game is going for, without bogging things down too much.  It's still GUMSHOE, it still moves fast, but now with more options and approaches to take when fighting it out.

The other new mechanical piece, and probably my favorite thing in the game besides the setting, is the Bonds and Personal Life system.  At character creation, the player designates Bonds with people, places, and organizations (like a church or other body).  After missions, the player and the GM play out short scenes of what the PC is doing during downtime, and one thing that the player can do is spent time with those Bonds to repair or reinforce those connections.  The mechanics of the game, especially the Stability rules, create a kind of gravitational pull that wears away those Bonds, and so spending your PCs downtime with those Bonds keeps them strong.  But, spending time on our Bonds means you are not spending time doing additional research into the Mythos or other tasks that might help you on future missions, so there are real cost/benefit considerations to maintaining your Bonds.  As a result, many if not most PCs will see their connects with friends and family slowly erode during the course of play, which really reinforces the theme of alienation, while still ultimately leaving it in the hands of the player and avoiding heavy-handed intervention by the GM.  It's very elegant and fits perfectly with the rest of the game. 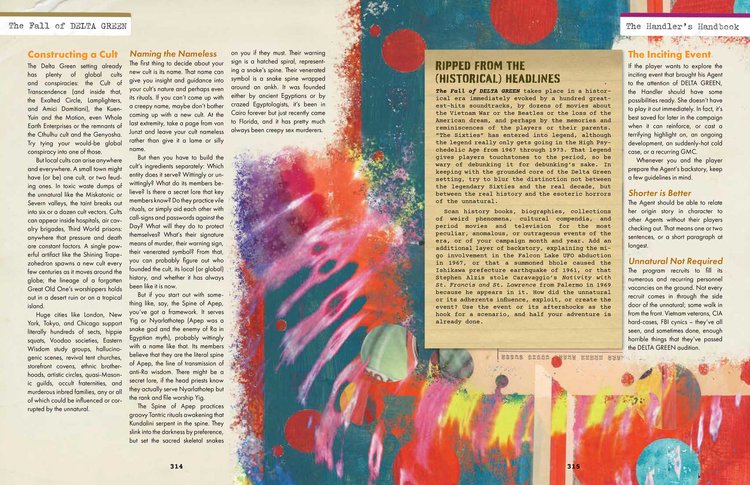 One last point--I have seen some reviews describe the physical presentation of the book as "amateurish," but I could not disagree more.  I think The Fall of DELTA GREEN is one of the most beautiful books Pelgrane has produced, and the layout and art design fit perfectly with the aesthetic.  The design is going for the random-pages-from-a-dossier look (a common choice for espionage games), but everything is washed through a sepia-toned lens that invokes films and television from that era.  The art is intentionally fuzzy and out of focus, heightening the weirdness and dislocation.

The Fall of DELTA GREEN won the Ennie Award for best setting a couple of weeks ago at Gencon, and it is well-deserved.  It is a deeply flavorful game that works even for those who are not otherwise massive Cthulhu fans, and the 1960s setting is a perfect fit for the tone and themes the game is going for.  The system shows off the flexibility of GUMSHOE, and is well paired with the setting.  The Fall of DELTA GREEN is not one of the most prominent GUMSHOE games, but it is a gem, and well worth a look.
Posted by Michael Boyle at 7:20 AM

Email ThisBlogThis!Share to TwitterShare to FacebookShare to Pinterest
Labels: Gumshoe, Ken Hite, Pelgrane Press, Reviews, Why This Game Is Great